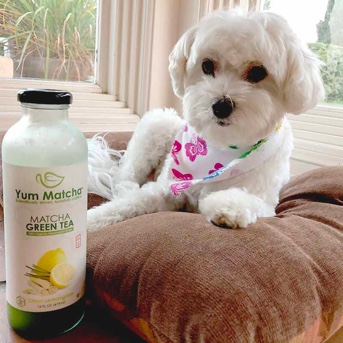 It's 2016. Through our mutual friends Dr. Andy and Dr. Joe, Dr. Tuan and Bill “The Flavor Guy” met on a fishing boat in San Diego. On that maiden voyage, Dr. Tuan discovered that Bill was a former heart attack survivor, and Bill found out that Dr. Tuan is a cardiothoracic surgeon. They clicked.

A decade ago, in his late 40’s, Bill suffered a heart attack and was diagnosed with serious coronary artery disease, a type of blockage called “the widow maker.” He was advised by his cardiologist to undergo urgent coronary artery bypass surgery. As a husband and a father with a beautiful family, Bill was naturally freaked out. He sought after alternative treatment to surgery, including a self-examination of the detrimental habits in his lifestyle. Eventually, 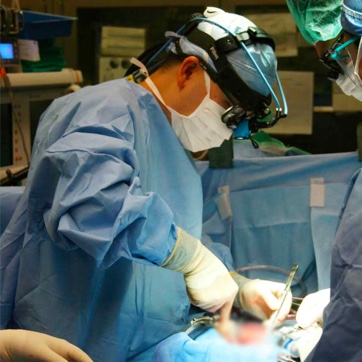 Bill decided not to undergo open heart surgery. He stopped drinking a six-pack of coca cola every day and cut back on eating refined carbohydrate. He ate more greens and took plant-based supplements that support heart health. His recurrent chest pain went away. In the back of his mind, he wished someday to partner with a cardiothoracic surgeon to spread the knowledge of what he had learned about heart health from a patient’s point of view. Fast forward a decade, to that fishing boat in San Diego.

Dr. Tuan has operated on thousands of patients with coronary artery disease. In his practice, he often takes on the most complicated and high-risk cases. In his mid-career, he had an epiphany about heart disease and subsequently educated himself about cardiovascular health through his reading on nutrition and health, subjects not taught in medical school. 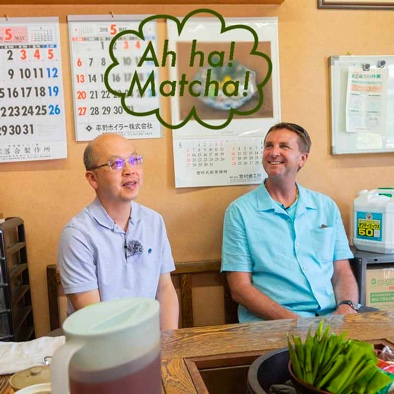 He learned how to make a delicious blueberry green smoothie that he drinks everyday as a meal replacement for breakfast and lunch. Along his journey to cardiovascular health enlightenment, he discovered matcha, a distinct finely ground green tea powder that is loaded with antioxidants. In addition to the green smoothie, he drinks matcha green tea every day. In his opinion, matcha green tea is the healthiest natural drink in nature. Fast forward to the fishing trip in San Diego where he met Bill.

Now you see why Dr. Tuan and Bill connected immediately in San Diego. A cardiovascular surgeon and a former heart attack survivor who are both into heart health, situated in a small six-person fishing boat, with ample time to converse while waiting unhurriedly for their bait to get hooked. Bill experienced his epiphany about cardiovascular disease through a personal experience. Dr. Tuan had his epiphany about cardiovascular health through his care of patients with heart disease. 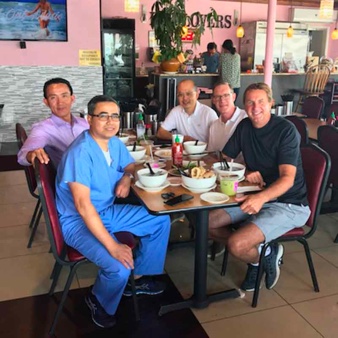 It’s 2017. Over lunch slurping a bowl of “pho” beef noodle soup, Dr. Tuan and Bill decided to produce a matcha green tea drink together. As self-appointed Ministers of Matcha, they made it their mission to spread the word about the health benefits of this amazing green tea elixir. Dr. Tuan kept his “day job” as a busy cardiothoracic surgeon. Bill “The Flavor Guy” was equally occupied being founder and CEO of his flavor company, Nature's Flavors. After operating during the day, Dr. Tuan would “moonlight” with Bill to concoct matcha green tea drink formulas. Expedited by Bill’s experience as a flavor chemist, they were able to create matcha green tea elixirs that are not only healthy but also uniquely flavored and tasty. To satisfy their sweet tooth yet avoid added sugar, they sweetened their matcha drink with a proprietary blend of erythritol and stevia, both natural sweeteners with essentially zero calorie.

It’s the first half 2018. Dr. Tuan and Bill embarked on a journey to Kyoto, Japan to observe tea leaf harvest during peak season. They toured rolling green tea fields where they mingled with farmers as they handpicked individual tea leaves. Within walled factories, they observed the traditional steps by which the harvested tea leaves are processed and then ground into the finely powdered form known as matcha. The trip culminated with a speeding bullet train ride from Kyoto to Tokyo airport, zipping by Mt. Fuji at a distance, evoking flashing memories of their enjoyment of sushi, sake, and of course matcha green tea. 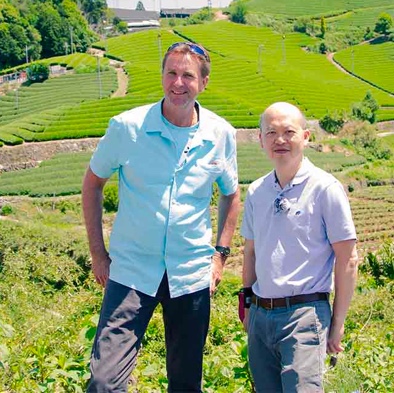 It’s the latter half of 2018. Much effort was consumed perfecting the matcha green tea drink formulas. Much creative juice was expended creating the label for the bottle. Dr. Tuan and Bill intended to utilize their one-of-a-kind label as a medium to educate consumers the science behind the benefits of matcha. Knowing that a beverage is “healthy for you” is not enough. Through their unique label, they wanted to encourage consumers to read beyond the nutritional facts and to inspire consumers to be inquisitive about what they drink and why they drink. Their matcha green tea elixir was a product of their “scientifically driven, tastefully crafted” principle. Dr. Tuan and Bill “The Flavor Guy” sincerely wish you will enjoy matcha green tea drink as much as they do. May you live a long, healthy, and happy life. Avoid the surgeon’s knife. By promoting cardiovascular health, Dr. Tuan realizes that he may someday put himself out of business. 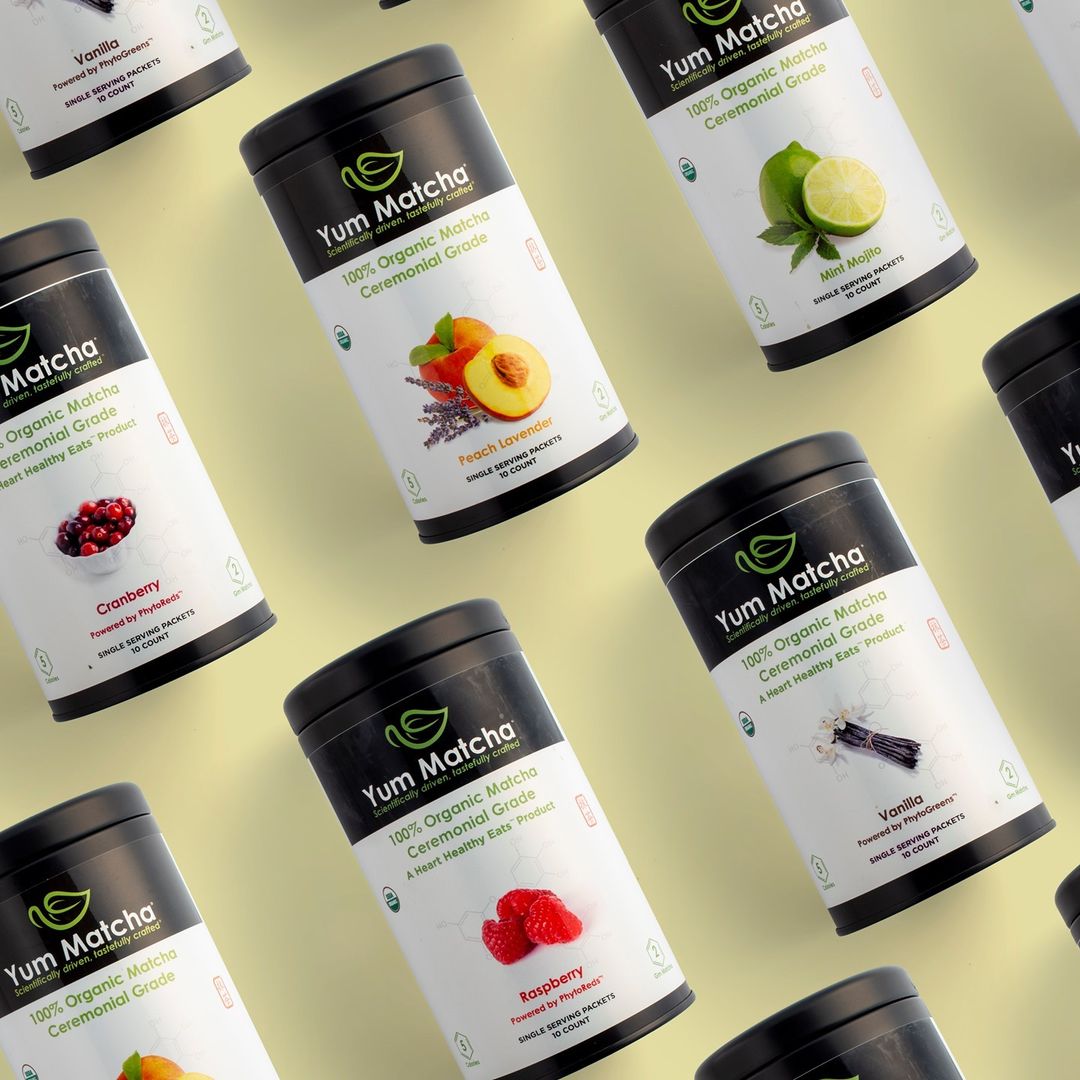